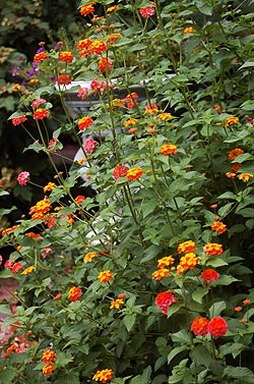 Comments - You simply can't beat lantana for summer-long blooms and heat tolerance. There are many varieties of lantana and the growth habits and hardiness differs greatly. Some grow large, some small, many won't survive the winter but others will. "Miss Huff" (named after a woman in Athens, Georgia in whose garden it was discovered) is the hardiest lantana I've ever grown. It has survived more than five winters.

This is a robust lantana, growing in a mound if you have the space for it, and can easily reach a height of 5 feet in no time. I've read that it can spread to 10 feet. I don't have the space for that but mine seems happy in the rather small 3-4 feet I've given it. The color combination of the blooms is an odd mix (orange and pink?!?) but somehow manages to work. This workhorse of a plant starts to bloom in late May and continues until frost. The first year I grew it, I waited until early spring to cut back the dead branches. In subsequent years, I've went ahead and cut it back in after the first frost and mulched it heavily. It is a magnet for butterflies.

Return to Perennials and Annuals 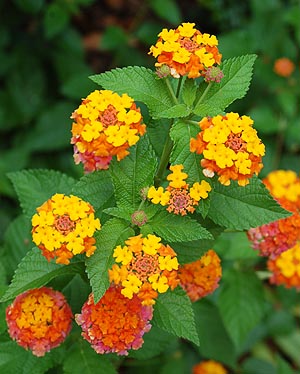