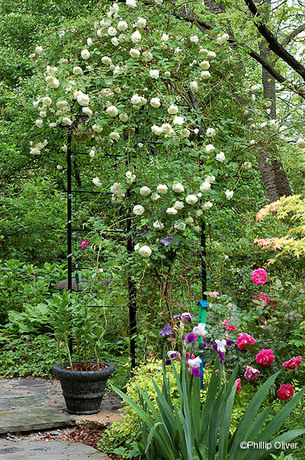 "Lamarque"
Their delicate beauty and tender inclination make the noisette roses one of the most popular classes of old roses for the South. They were developed by John Champney who crossed rosa moschata with Old Blush (which was a gift from his French nurseryman neighbor Philippe Noisette). The first result was Champney's Pink Cluster (1802). Noisette was given seedlings from Champney and he developed "Blush Noisette"and sent them to his brother in France. The French eagerly experimented with breeding these roses and developed the noisette class. The first roses produced were shrubs but later, when the early noisette varieties were crossed with tea roses, beautiful climbers were produced and they remain the most popular in their class today. They are treasured for their delicate beauty, pastel colors and luscious perfume fragrance.