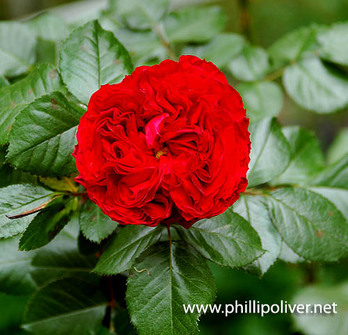 "Tradescant"
The 20th century was dominated by the success of the hybrid tea roses. The old fashioned roses took a back seat to the hybrid tea craze and were almost forgotten. Enter David Austin. In the 1950s, Austin, a nurseryman in Shropshire, England, began to experiment with breeding the old European roses with the newer modern roses. His intent was to develop a class of roses that exhibited the charm and character of old roses with the ability to rebloom like the newer roses. His success has been tremendous. Although his first introduction, Constance Spry (1961), was not a repeat bloomer, he pressed on and subsequent experiments were successful. He issued his first catalog in the late 60s and hasn't stopped since. Every year newer varieties are introduced and they just keep getting more impressive.

The English roses are mostly shrub roses although some can be trained as climbers. Although Austin himself claims that his roses are disease resistant, this is not really true. I have found that many of them are highly susceptible to blackspot. Some are more disease resistant than others and climate plays a major factor in this. This is a beautiful class of roses though and well worth experimenting with. My collection is quite small but every year I find myself wanting to try more of them.